My husband and I went to dinner last night at one of our favorite restaurants in Berkeley. On the way, we saw a group of about 8 or more motorcycle cops gathered at a corner gas station just down the block from where we were going. As we waited for the light to change so that I could make a left turn, we wondered what was up. Clearly, all those cops weren’t just to going to get slushies. Then I saw the answer: one of the officers carried a large handful of plastic handcuffs. Ah, a protest was in the works nearby. Sure enough, looking the other way down University, we saw a gathering in the distance.

We arrived at the restaurant, packed with a respectable Saturday night crowd. We got a table quickly. As we settled in I took out my iPhone and started looking for tweets. #Berkeley gave me the answers and confirmed my suspicions. Folks marched for black lives. They gathered for Eric Garner. They chanted for Michael Brown. They hollered for Tamir Rice, and the many other black lives taken by police needlessly.

I’ve spent most of last week trying to write about the latest grand jury insult, the failure to bring charges against NYPD Officer Daniel Pantaleo for killing unarmed Eric Garner. Bons mots have not been forthcoming. There is nothing clever that can be written about this current crisis. I recognized Ferguson a national tragedy. That tragedy has now replicated itself many times over.

At dinner, I asked myself, how does this current crisis affect me personally? Besides the anger, pain, and hurt I feel, fear also comes into the equation. In 2014, even in the liberal Bay Area, I have to keep looking over my shoulder. I have to wonder if people will see me as me or as a Big Scary Black Man. Will someone call the cops on me while I walk through the mall? Will an officer stop me and rough me up for being somewhere s/he felt I did not belong?

These questions, thrust upon me by others, I must now carry into the 21st century, over 100 years after DuBois declared that race would be the prime issue of the 20th century. I weep knowing that a generation of black folks born in 2000 and beyond will still have to grapple with this shit, at least for the first half of their lives. How has it come to pass that the ugliness of race hatred continues to fester so relentlessly, even as our society has grown more diverse during the first 50 years of my life?

Before our salads arrived, the streets outside filled with protesters. They marched down University, heading west. I ran out to take pictures. Hands up. Don’t shoot. I can’t breath. Black lives matter. A few police followed on motorbikes and in cars and vans. 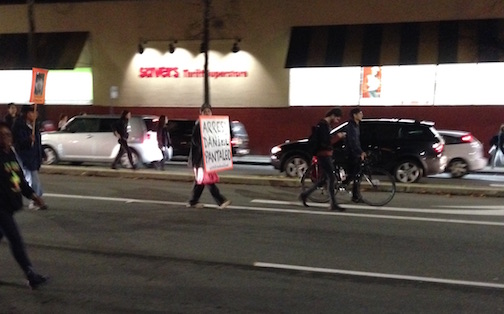 Another conclusion I came to last week, one that many have stated, is that cameras don’t matter. Michael Brown’s death occurred without cameras present. The grand jury in St. Louis declared that witnesses to the shooting contradicted each other. A fuzzy picture exists of what actually happened. (For the record, I do not believe the statements made by former Ferguson officer Darren Wilson.) In the Eric Garner case, though, everyone figured that there would at least be an indictment against Officer Pantaleo. But no, there wasn’t, nor against any of the other officers involved in Mr. Garner’s takedown. And in this case, a video caught everything.

It might seem shocking that a video recording didn’t enlighten a jury, until we remember our history. The Rodney King beating of 24 years ago was also video taped. And we know how that story went. Though even in that case, there were indictments. Four officers had to stand trial. They were acquitted, but they had to stand trial. So I guess one could say that we’ve gone backwards. In extraordinary cases like Rodney King, and even Oscar Grant many years later, we could expect an indictment. Not anymore.

Society has allowed its irrational fear of black men to create some very dangerous public policy. This policy now states that a police officer is always right, no matter what s/he does. Conversely, a black man is always wrong and is in some way responsible for what happens to him. Due process be damned. Michael Brown allegedly did not obey orders and became unruly, so he was shot to death even though he was unarmed. Eric Garner reacted when four officers started pawing over him, so he was taken down. Some commenters have callously added that he died because he was overweight and had asthma, leaving the police blameless. 12 year old Tamir Rice did not drop his toy gun fast enough — as if two seconds were plenty of time — so he was shot to death.

It doesn’t matter. Outsized fear of blacks in our society means that if a black person does not obey instantly and immediately, they face punishment, up to and including summary execution. That is horrid and barbaric public policy. That people actually defend this line of reasoning is deeply, deeply troubling. We cannot live in a safe and just society when we rob segments of that society of its humanity. Slavery should have taught us that, but we continue to find new ways of making similar mistakes over and over.

A second group of protesters walked by on University. Following the tweets, I see they went to San Pablo, then turned north because the police blocked them from going any further west. No doubt the police wanted to prevent them from reaching the I-80 and blocking the freeway. Then I saw tweets reporting that the protesters were headed back east, on Delaware, just a couple of blocks north of the restaurant.

Soon after these tweets appeared, a phalanx of cops showed up. They roared onto the street  in a Humvee. A Humvee? Folks in the restaurant were appalled. Many lips decried the militarization of the police. The Humvee belonged to the Hayward Police Department, a city a good 20 mins south of Berkeley. UCPD officers from the nearby Berkeley campus also joined the ranks. They lined the street, preventing access up Acton, towards Delaware. Several helicopters flew overhead, shining their lights on us. It was a crazy scene. As I tweeted about all this, someone tweeted back, “You’d think they were going after Godzilla.” Indeed.

Until that day comes, we will have to remind the world that black lives do matter. And we’ll have to do better about penalizing those who do not recognize and respect this simple statement, even if they be police officers.