Every few years, it seems, rumors swirl around about Bert and Ernie. Are they roommates, just good friends, or something more? Whenever such rumors come around, the Sesame Workshop, producers of Sesame Street, quickly issues a statement: they are just good friends.

In the latest round of this “controversy,” Mark Saltzman, who wrote for Sesame Street in the 80s and 90s, stated that he always thought of the pair as a loving couple. Without an agenda, no pink triangles or rainbow flags, not even so much as a show tune soundtrack in their apartment. Just a couple living their lives.

Once again, Sesame Workshop issued a statement saying that they were just “best friends.” 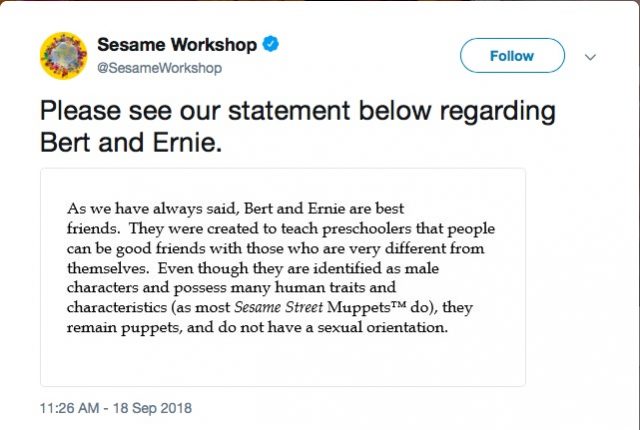 Let’s study this statement. “Even though they are identified as male characters and possess many human traits and characteristics…they remain puppets, and do not have a sexual orientation.” (Emphasis added.) So they have gender, but no sexual orientation. I fail to see how they can present gender and “many human traits and characteristics,” except the one, the unspeakable one.

I grew up watching Sesame Street. It premiered when I was four. I remember other couples on the show, some human, some muppets. They all presented as heterosexual without a qualm. But sadly, as always, non-heterosexual orientations need not apply. This, despite the fact that Mr. Saltzman is not the only gay person to have worked on the show. Others have. At least one has died of AIDS.

It all comes from a failure to have intelligent, age appropriate conversations with kids about other sexualities and genders and other coupling possibilities. I did not wake up on my 18th birthday and “decide” BOING! I’m GAY! No. That’s not how it works. I had my first gay impulses when I was six or seven. These were the same sort of yearnings that many kids have at that age. But when a boy longs for Patrick instead of Patricia, the so-called adults in the room have a fit. That’s where the problems begin.

Representation matters. Ernie presents as black while Bert presents as white. And they live together in peace. Seeing as the show is a child of the 60s, it makes sense that it would portray racial harmony among the muppets. I’m sure Sesame Workshop would have no problem with this interpretation. So it saddens me greatly that they continue to put up a barrier when it comes to non-heterosexual identities and couplings. Pretending that Bert and Ernie have no sexual orientation, just because the subject is “taboo,” is silly and wrong. It’s time to lift this taboo once and for all.

Imagine all the good it would do for a show like Sesame Street to have a gay couple or lesbian couple or  a transgender character. I could hear one of the kids on the show saying offhandedly something like “That’s Bert and Ernie. They’re married.” Or, “That’s Joe. He likes to play with trucks.” One need not go into anything deep about sex lives or the like. After all, do we know what Susan and Gordon do behind closed doors? No. But we know that they are married.

I wrote a few years ago how Grover was one of my queer icons. A part of me identified with him on that level, as a child, because it felt comfortable and natural for me to do so. I’m sure the then-Children’s Television Workshop would have poo-poohed me. But as Grover himself would say, with a bitchy cadence, “I do not care!”

One day, I hope Sesame Workshop will care, and will stop hiding behind societal pressure to maintain a straight face. Let a character “come out.” Let one have an innocent relationship, the way children do at that age. All kids do. I had plenty of crushes when I was six or seven. And they were all boys. And that’s OK. Just do it. It would have done me a world of good to have seen positive role models at so young an age. Representation matters.