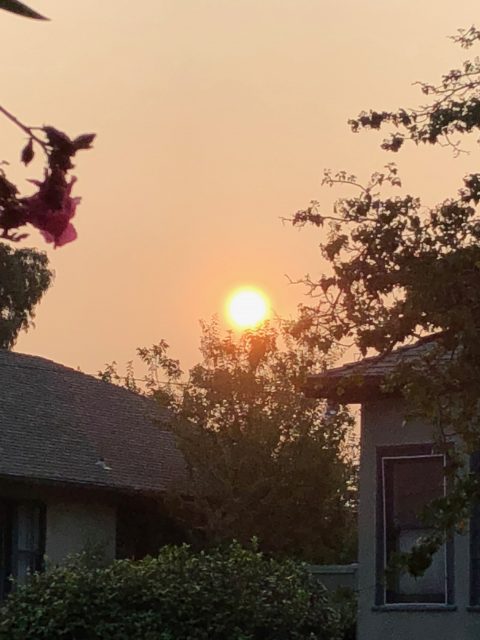 Just over a week ago, my weather app reported an air quality index reading of 158: Unhealthy. A pit formed in my stomach fed by flashbacks of last year. Once again, California was on fire. I looked out the window and the sun took on familiar colors as it moved toward the west. It began as an orangish yellow, turning more orange as it descended. Finally, as it parsed though a thick swath of smokey atmosphere, its hues tinted red.

Here we go again, I moan.

October 2017 saw the worst fire season on record at that time for much of the west coast, including California. Harsh winds blew the night the Napa fire ignited. The smell of smoke alarmed me, got me out of bed. I wondered if we had a fire in our bucolic neighborhood, lovely trees that would make good fuel. Noticing nothing unusual outside, I searched online. Twitter revealed that the smoke I smelled came from Napa, 46 miles away. It had a rancid smell, like someone burning garbage. Turns out, the fire started in a dump. The wild winds that night transmitted those noxious fumes with the speed of an electric current traveling down a wire.

Last year was the year of the N95 respirator. Regular dust masks do not keep out the particles created by wild fires. By the time we learned we needed N95s, the hardware stores had already sold out. Friends gave me some that they had. I also kept my asthma inhaler handy.

As a kid, I had asthma really badly. Attacks lasted not hours or days but weeks. I can remember staying out of school for at least 2 weeks behind an attack. I simply couldn’t breath. The proverbial elephant sat on my chest and stayed there. My little, 8-year-old lungs could not get enough air inside of me. I had to take medication, a sickly yellow syrup that tasted horrible. They tried to mask the taste of the medication with sweetness, but no amount of sugar made that medicine go down without a grimace on my face. Still, I took it. I gulped the nasty mess dutifully every four hours, hoping, praying that it would liberate my lungs, get them to function properly again, so that I didn’t have to think about breathing anymore.

That was the thing. I felt like I had to consciously think about breathing in order to make it happen. After several days, that became very exhausting. Sometimes I wondered if I would just stop breathing. I spent many hours staring at the ceiling wondering about that what if.

As I got older, my lungs growing to adult size, the bad attacks ended. Only occasional flare ups come and go, brought on by such things as cat dander or smoke.

My husband and I went camping once at Lassen Volcanic National Park. For some god-unknown reason, the park was doing a controlled burn not too far from the campsite. Yes, it was smoky. Very smoky. At night, I could not sleep. Whenever I nodded off, I’d wake up almost instantly, gasping for air. The elephant had returned. I felt as if I had regressed and my lungs returned to their former, diminutive, vulnerable state. My husband didn’t like the sound of my gasping. At the break of dawn, he packed us up, threw me in the car and barreled us out of there. Once we cleared the smoke, and got to a lower elevation, my breathing returned to normal. Back home I slept well that night.

This year’s fire in Mendocino was declared the largest in California’s history. Families lost homes. Some lost their lives. Scientists tell us that this is the new normal, due to climate change. Hotter, drier weather feeds the fire storms. Last year the bad fire season came in October. This year it came in August. We have longer, deadlier seasons to look forward to as our climate changes. I remember Santa Ana winds as a kid growing up in LA. Now Northern California has an equivalent. They whip through fast, carrying dry danger with them.

I look at the red sunsets and worry. I don’t want to gasp anymore, forced to think about my breathing in order to make it happen. I don’t want to suffocate on someone else’s misery, the fine particles that used to be their homes.

When I became a teenager, I no longer had to take the sickly yellow syrup for asthma flare ups. I “graduated” to inhalers and flavorless pills. But for years, I couldn’t look at a tablespoon and not have the taste of the nasty yellow syrup return to my tastebuds.