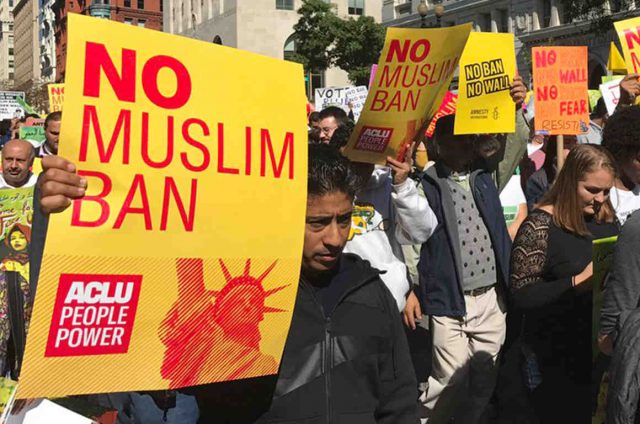 The first punch came when Mitch McConnell refused to consider President Obama’s final Supreme Court choice, Judge Merrick Garland. In spite of everything, McConnell held his ground and won. Judge Garland did not receive so much as a hearing.

The second punch came on November 8, 2016, a day that will live in infamy. Trump got elected. I don’t buy the bit about folks flocking to Trump as a protest vote, to shake up the system. No. Trump got elected because a lot of people who likely would have voted against him didn’t vote. In some states, particularly in Wisconsin, many who wanted to vote couldn’t because of restrictive voter registration laws.

And now we see the results. The Supreme Court upheld Trumps’s anti-Muslim travel ban, even after lower court after lower court ruled against it. Additionally, the Court also ruled in favor of fake abortion clinics set up by anti-abortion zealots. These storefronts posing as medical offices try to  shame women out of having abortions. They have no medical staff and are not medically certified. Their operation has nothing to do with medicine or healthcare. It has everything to do with manipulation and anti-woman animus.

In a day or two, the Supreme Court will likely deal a major blow against unions. They will rule that unions cannot collect “fair share” payments from people who are covered by a union contract, but are not union members. “Fair share” works on the principle that everyone who works under a union contract benefits from collective bargaining, therefore they should pay their fair share to the union. “Fair share” payments are often less than union dues. If the Court decides against “fair share,” unions will lose a great deal of money, weakening them further.

The right has relentlessly gone after unions for the last 50-60 years with dire consequences for workers. Look at wage inequity. It’s out of control. Furthermore, look at public sector jobs. The right has vilified them nearly out of existence. Indeed, the Trump administration has recently put forth a plan that would in effect eliminate the public sector entirely. If Congress enacts his radical ideas, the measures will likely face judicial challenges. Guess what will happen.

McConnell’s unprecedented behavior precipitated the first punch. But the second punch was a self-inflicted wound. And that’s why I’m livid. We don’t have to live in this world. We live in it because folks do not take their power seriously. Why do Republicans move heaven and earth to dissuade folks from voting? Why do they gerrymander everything from congressional districts to the Supreme Court? Because they know that they’ll lose if they don’t.

Republicans represent the interests of too few people: people with shit loads of money. So they (punch one–POW!) convince folks without shit loads of money that they should vote against their interests by lying to them. And (punch two–POW!) they rig the election system to make it hard for non-Republicans (particularly people of color) to vote. Furthermore, they set up congressional and state legislative districts in such a way that Democratic votes do not carry as much weight.

Their actions are criminal. But the biggest crime is that we allow Republicans to get away with it. While Democrats worry about procedure and being “nice,” Republicans are remaking the world in their image. And it’s a butt-ugly world.