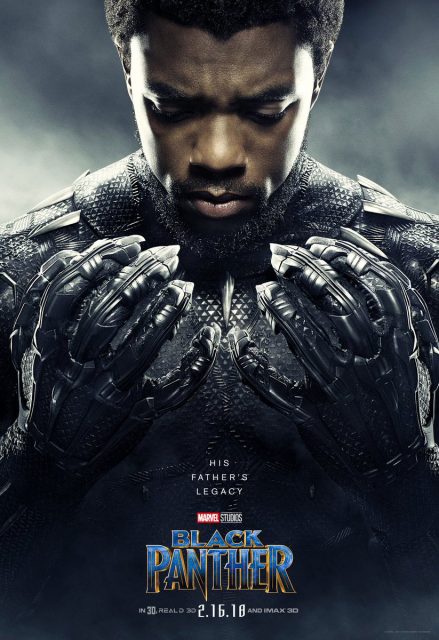 My husband, our friend, and I had dinner at a Thai restaurant just around the corner from the theater. Across the room from us sat a group of about 10 African-Americans, ranging in age from youngster to auntie. Most wore beautiful prints of African origin. Some of the men wore hats.

We smiled. No need guessing where they were going after dinner. I wish I could have taken a picture of them. They looked so beautiful. Beyond their outfits, their demeanor carried purpose and pride. Folks don’t normally get that dolled up to see a movie. Wakanda had already cast its spell.

When was the last time I stood in a long, long line waiting to get into a movie house? I can’t recall. None of the recent blockbusters — Harry Potter, Lord of the Rings and the like — trigger that memory. I think I have to go way back, to the original Star Wars trilogy of the late 70s and early 80s. Or maybe to the very first Star Trek movie in 1979. In any case, it had been a while.

But there we stood, on Grand Avenue. We all braved the weather, clustered as close to the building as possible to guard against the cool breezes. Our friend had left the Thai place a bit early to secure a spot for us. We got lucky. We stood only a couple doors down from the theater. I tried to look at how far the line stretched down the block, but couldn’t. I’m sure it reached the parking lot about a good 400 feet away.

High excitement ensued when we started to move. Despite the colorful chaos in the lobby and entering the theater, we found good seats rather easily. I heard that mall cineplexes held equally animated crowds, but for Oaklanders, there is only one place to see an epic like Black Panther: The Grand Lake. The director himself, Ryan Coogler, an Oakland native, had come to the Grand Lake and surprised the crowd a few nights earlier. The old movie house still knows how to throw down the magic.

When the movie started, all became serious. No distractions. We lived the movie with laughing, cheering, and gasping. I loved the older black lady behind us who said “That’s right!” whenever someone on screen referenced their ancestors. I wonder when was the last time many of the aunties and uncles came out for a superhero movie?

My short critique: I loved it. I had feared that the story would depict Wakanda and its ruler T’Challa, aka Black Panther, fighting off racist colonialists trying to takeover the magical kingdom and strip it of its scientific secrets. In other words, I feared it would depict a world too close to our own, where a white man rose to power to undo all that his black predecessor had created.

But there was none of that. Indeed, throughout the movie white people were unimportant. Instead the story focusses on conflicts within Wakanda itself. By extension, the story addresses issues relevant to African-Americans and Africans. Mainstream movies don’t normally do this, unless they deal with slavery or the Civil Rights Movement. For a superhero film to take this approach is nothing short of revolutionary.

I think we were hungry for Black Panther. We need Wakanda. How happy I am that we entered its realm.