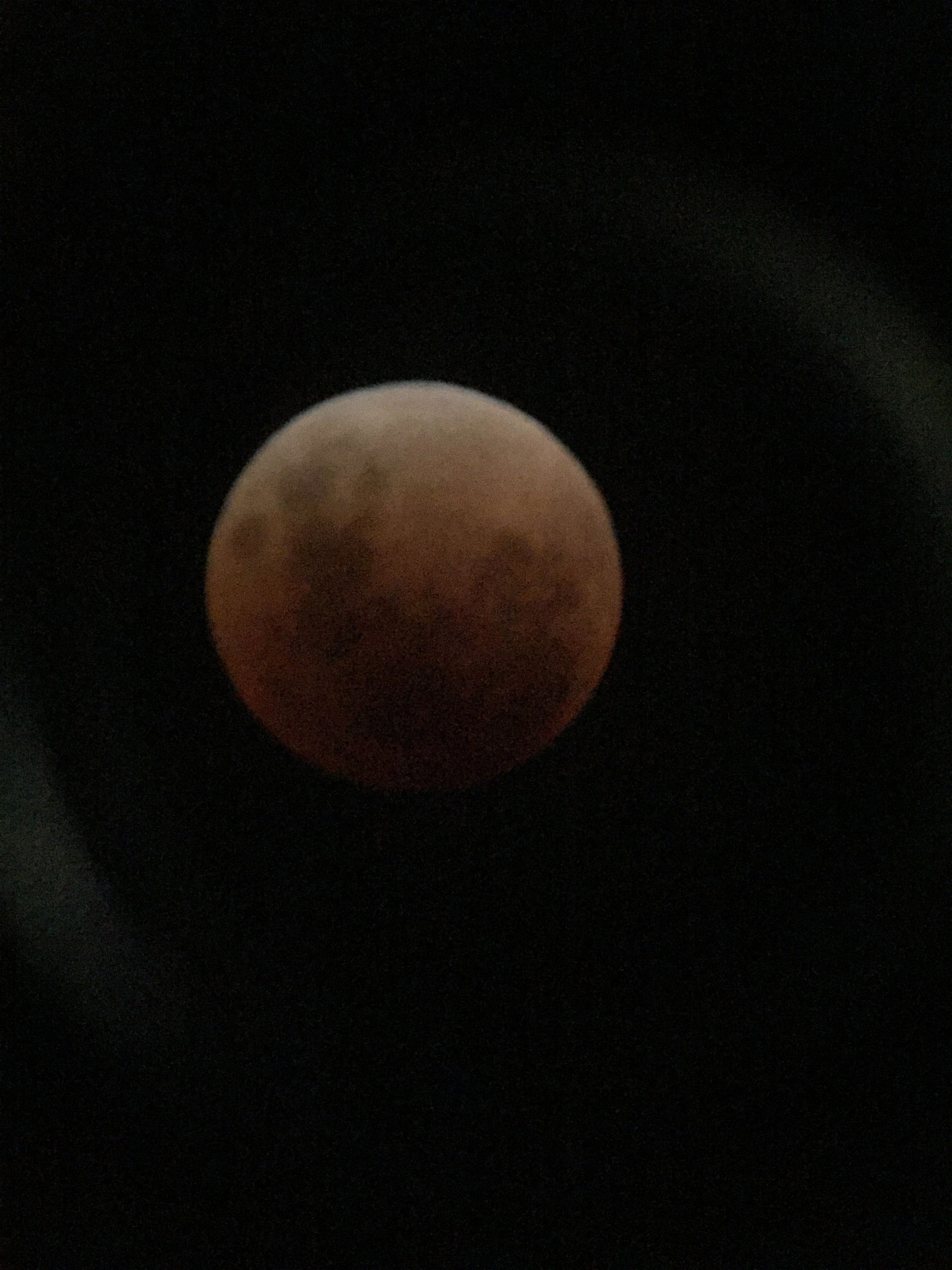 Karl the Fog stayed away, allowing Bay Area skywatchers a chance to observe the Super Blue Blood Moon total lunar eclipse that occurred in the early hours of January 31. I get up early anyway on weekdays. My current workout regime requires it. But that Wednesday morning, I had an extra incentive.

Low clouds had thwarted my first attempt at seeing a lunar eclipse. I was probably 10 or so. I remember shaking my fist at the air in anger. A few years later, though, we hit the jackpot. My brother Robert packed us into his car—sister Tania, brother JK, and me—and we trekked up the narrow, tortuous road to Mt. Wilson. Home of the Mt. Wilson Observatory and virtually every television and radio transmitter for the LA area, we had the perfect vantage point for viewing the eclipse.

Light pollution hadn’t totally killed the view from Mt. Wilson. Stars aplenty filled the sky. And against this backdrop sat the moon, creeping deeper and deeper into the Earth’s shadow. I thought that it would turn completely dark. But we all geeked out when it turned blood red. Look! It’s Mars! we all exclaimed. And so it appeared, the Red Planet came in for a close up, a cratered planet taking the place of our cratered moon.

A large group had gathered in the chilly air high above LA. Many brought telescopes and happily shared them with those of us that did not. But without a scope, you saw what looked like a 3-D object floating against a sea of stars. It appeared that all one had to do was reach out and grab it like an orange off a tree.

We all talked and talked about what an experience it had been as we descended the mountain and drove home. I remember thinking, as we passed Jack-in-the-Box and McDonald’s on the way home, I could get a job at one of them to earn money to buy a Celestron 8, the king of the telescopes for amateur astronomers. Robert raved about its advanced, Schmidt-Cassegrain design, giving it power in a compact package. We talked about getting a van, one of the classics from the 70s, fitting it with a dome and taking out the Celestron to the high desert. A great fantasy that never came to pass, but always filled our minds with hope.

Early Wednesday morning, before working out, showering, eating breakfast, and going to work, I took out my 4” Newtonian telescope out to the curb to get close up views of the eclipse in progress. There it was, the Super Blue Blood Moon. The giant orange returned, tempting us to pluck it from its celestial tree.

JK and Tania watched from their respective homes in Southern California. As I watched from mine in Oakland, I thought of Robert and that special trip to Mt. Wilson long ago. Soon to be four years gone, on February 11, I felt a part of Robert’s spirit with me as the Moon quietly traversed the Earth’s shadow.