Do we still have a functioning democracy in this country? Sadly, the evidence points to no.

I submit the following as Exhibit A to support this answer: 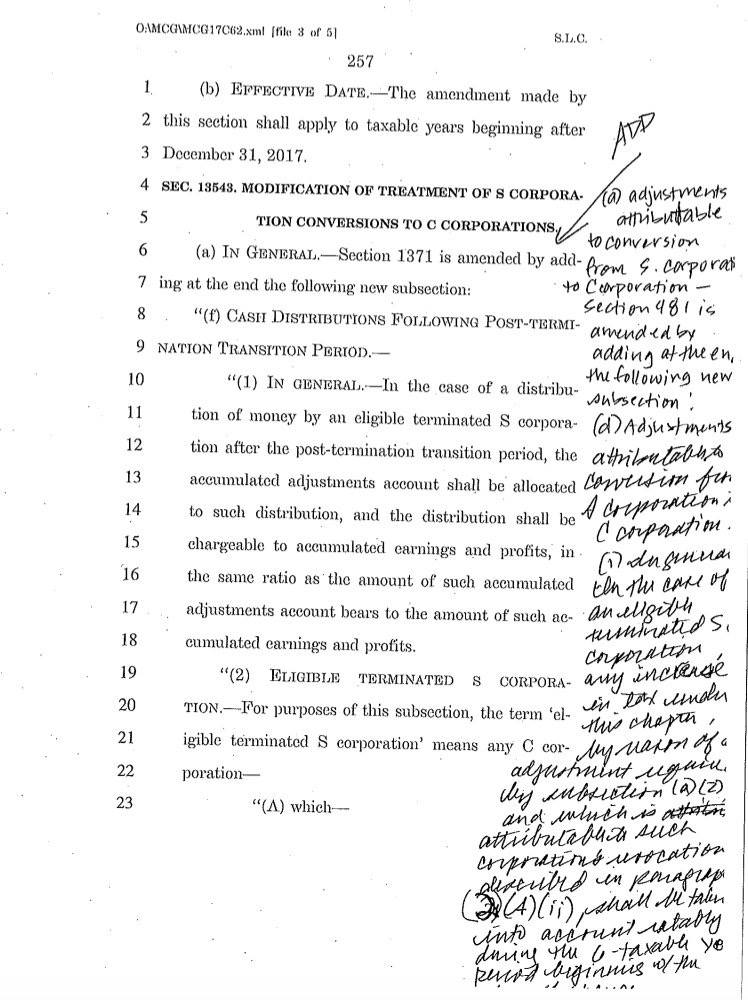 This page is from the tax bill Senate Republicans rewrote and passed in the middle of the night—a 429-page bill that we received just hours before the vote and which had zero public hearings. Can you even tell what it says? Leave your guesses in the comments.

Despite its length and complexity, no one got a chance to read it before voting on it late last night, where it passed on a largely party-line vote of 51 to 49. Senator Bob Corker of Tennessee is the only Republican to vote against it.

I tweeted my first thought about the bill Saturday morning:

The murderer rising with the light killeth the poor and needy, and in the night is as a thief.
-Job 24:14#TaxScamBill

I’m not a Christian and learned this verse from an episode of Miss Marple (the Joan Hickson version, of course). But even without subscribing to the Christian faith, one can easily grasp the larger truth this verse conveys. It accurately captures what happened in the Senate, in the middle of the night.

I’ve been thinking all day about this verse, the Bible, and how so many Senators who voted for the tax bill call themselves Christians. Many religious leaders from many faiths have declared that no person of faith could possibly support the tax bill, an obvious giveaway to the greedy at a cost of the needy. And really, at a cost to society at large.

Society only works when you fund it. Firefighters, police, maintenance, healthcare, education, all of these things make up a society. We gather together to set up these institutions to help us, the people, live out lives. When we fund these things, we do well. When we don’t fund these things, we suffer. The Bible warns against avarice, greed, and gluttony. Yet, these sins are commonplace, even celebrated.

Republicans proved, again, that they stand for nothing but money. They use the Bible when it suits them. Otherwise, they easily disregard it. It suits them to control others, so they use the Bible to bash LGBTQ folks. However, their attachment to money allows them to ignore passages about the evils of greed. They cannot see how much they hurt others, or they simply don’t care.

So great is their hypocrisy, that they can now put stuff like the above up for a vote and get it passed. I mean look at it. What a mess. If I had turned in a paper like that to my 9th grade research writing teacher, he’d still be kicking my ass all these years later. Nothing like that should have appeared on the Senate floor, much less voted on. That’s a travesty.

We have not arrived at this point by accident. Many roads of good intention paved the way to our current hell. Ronald Reagan sang the gospel of greed and many listened, took heed. Thus, 28 years after he left office, we now have an elite class of citizens who own enormous wealth. We now view this as normal, as part of a thriving capitalist society, a job well done. We don’t view such obscene wealth as we should: a sickness. Why covet what you cannot possibly use?

So no, we do not currently have a functioning democracy. A majority of the country opposes the tax bill, yet it passed. Makes sense, really. Those who passed it do not care about the Bible’s admonitions against greed, despite calling themselves Christians. Why should they care about the will of the people, even if they call themselves defenders of democracy?