A megathrust earthquake struck on June 22, 1996. Mom died. So powerful an event, I knew it had happened without solid confirmation.

The nurses kindly said that there had been no change in my mother’s condition, though the pauses in their speech told me what they did not want to say. Later that morning, I cried all during breakfast, unable to finish my blueberry pancakes.

I have a friend who lost his mother when he was only 12. Only recently has he opened up about how her early passing has affected him. Revealing. Another friend, a Twitter acquaintance, wrote about losing their mother when they were nine. A haunting piece. The deepest grief: how to cope with losing someone one barely got a chance to know. That’s a megathrust of a different magnitude. My mom lost her own father when she was 14. I’m sure that haunted her all of her life. She loved her father.

No, I was 31 when mom died, so we had a chance to develop a maturing relationship. I told myself that at least we parted on good terms, with not much left unsaid. And yet, and yet.

She knew her time was near. A few weeks before the end, she asked me if I had had a good childhood. I assured her that I had. I told her that I was about to meet my partner’s family for the first time next month. She “I’m sure that will be a great journey for you.” Mentally, I paused, even as I kept talking. She saw herself not making that journey with me, I thought.

The hardest part was seeing how her death affected my dad. The megathrust struck him hardest. He lost the greatest part of himself that day. Brother Robert had already called to tell me the news when my father did the same some hours later. I was playing tabla at the time, trying to steady my nerves. My other half was booking a flight for me. Dad cried during the whole short phone call. I know, I said, I’m flying home as soon as I can. I love you too, Dad.

If that day had been a Doctor Who episode, I would have entitled it “The Road to Monterey.” As it happened, my other half and I were in Monterey that weekend for a conference he was attending. I don’t think I’ve been to Monterey since.

Amazingly, I found a cab to take me to the house in South Central from LAX. Dumb luck. Fate. Whatever. The street looked unfamiliar. The house still and eerie. I had a drama queen moment. I saw her empty wheelchair in the corner of the living room and a ran towards it, crying. I hugged the empty chair while my family watched, tearfully.

Just a month earlier, I rode the motorcycle down to visit during Memorial Day weekend. The last waltz. Mom had been in the hospital a few weeks earlier, after the first heart attack. She had recovered, though was weaker. I measured her strength by the tightness of her embrace. Lovingly solid, but definitely weaker. When I rode up to in the front yard, she was sitting in the doorway, in her wheelchair. Waiting for me.

There are songs from that period that I can no longer listen to. Nor will I say what they are. I still haven’t played them, all these years later. Megathrusts have lots of aftershocks.

Dad came out, a smile on his face. He was happy that to see us. My three brothers, my sis-in-law, me. My sister wasn’t there. She had been out at an event, hours away. An early adopter to cellphones, she nonetheless was out of range. I had a secret dread. What if something happened to her? What if we lost both of our strong women that same accursed weekend. I felt great relief when she finally got home.

The next day, Sunday, we all gathered again and talked. What do we do. How do we proceed. My dad seemed lost, and genuinely confused. When he asked questions, he looked at us for answers. I felt his eyes waiting for me to give a reply. A shift of duties. I became the adult. That was hard. My parents did not belong to any church, so we had no church service. We divided up the roles. Robert gave the benediction. Louis the eulogy. I mc’ed. I think that’s how it went. I have the program buried somewhere. One day, I may dig it out.

Dad made only one request for the service. He wanted the Might Russell Players, me, my sister Tania, and brothers Louis & Robert, to perform “You Are So Beautiful.” We obliged.

I think I went into a form a shock. I heard voices that night while trying to sleep. One brother, then the other, then someone else. It sounded like they were in the room with me, though I was alone, lights out, the radio quietly playing classical music. I couldn’t hear my mother’s voice, or even remember exactly what it sounded like, and that scared the shit out of me.

The megathrust took on various forms in the weeks and months afterwards. As I have written before, classical music had to go for a while. In came jazz. After the initial crying spells, I really couldn’t let myself go again for months. I tried, feeling that I needed the release, but it just wouldn’t happen. Until October. I got my long-distance phone bill and it was noticeably smaller. Mom and I talked a lot on the phone, sometimes several times a day. Seeing the smaller bill told me that she was really gone. Forever. And I stayed home from work and cried. After a few hours, I went out a bought a copy of Mary Poppins to watch. I had wanted to get my usual depression go-to film, Willy Wonka and the Chocolate Factory, but the store was out of copies.

It’s hard for others to fathom what a megathrust can do to you. Someone I worked for as an assistant said to me that she knew was I was in grief, but that I really wasn’t there for her. She needed me to be more focused on the work. What I had failed to do for her, she never said, or maybe I just don’t remember. Regardless, my anxiety about being good employee clashed with my anxiety over losing Mom. Another aftershock. We hadn’t worked together for a very long time. She may have been having a bad day. We all have bad days. I lost a beloved relative, and my body and mind were still in adjustment. Such things take their own time, not anyone else’s. I’m glad we no longer work together.

Aftershocks fade after a while. The ground settles. Other events happen to fill the mind and occupy the time. But they still occur, sometimes at the oddest provocations. Brahms can still be a problem. And then there’s the other, whom I still haven’t played. Maybe I will again, one day.

But now Dad is gone and Robert is gone. So much loss. Too many ghosts. When my dad died, I said that his death was sad — he was just shy of 80 and had lived the last 10 years of his life in grief over his wife — but my mother’s death was a tragedy. She was only 67 and had lived too many years in pain from lupus and other ailments. Robert’s death came back full circle to tragedy again. It was a different type of megathrust. I’m still feeling my way around it, two years later.

But 20 years has not erased the intensity of the Original Megathrust. Like an actual earthquake, it caused upheaval, cracks, uncertainty, panic, loss, loss, loss, loss, and more loss. Since 1996, I’ve measured my life in events that happened before Mom died and after. She met my husband, but she never read the final version of my book. She never heard Shirley Bassey’s “History Repeating” no matter how many times I think we discussed it. She was there for Rodney King, but missed 9/11. Oh, 9/11 would have destroyed her. My faith in humanity came from her, and such a cold, murderous act would have undone her. The hatred and islamophobia that followed would have crushed her further still.

Ella Fitzgerald died a week before Mom did. Finally, towards the end of her own life, she admitted that she was jealous of Ella, and that’s why she claimed not to like her. She finally came around, in the end. Heaven knows why she was jealous — she had a gorgeous voice. But these things happen. Because human.

I heard a voice in my head that day, while walking around a park. It was my mom’s voice. She said “And while my time is nearly done, the best of times are yet to come.” I head it twice, like an incantation, and then it stopped.

Our last phone call, two days before the end, had a pregnant pause. I still wonder what we both said to each other during that moment, before we said goodbye, then hung up. 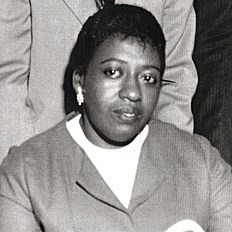 Louise McVey Russell, 1965, around the time I was born.